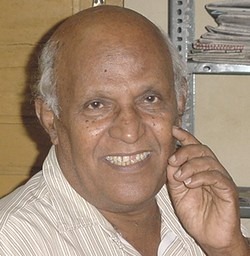 The moment I decided to accept the invitation to become the Founder Principal of the Rehoboth Theological Institute (Trichur), the Steering Committee gave me a free hand in organizing the academic side of things. The biggest question now was: can an institution of such high standard and quality be established using only believers from the assemblies! 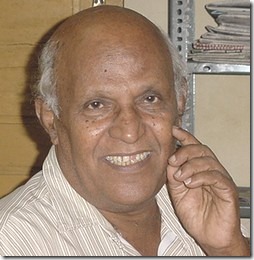 Pic: The Late EK George during a relaxed moment at BBI in my room when we discussed the formation of RTI

Many BBI faculty members assured me that this can be done. One of them was the late EK George. Having studied at one of the best theological seminaries in North America, he assured me that the same quality of training can surely offered at RTI. He promised to take care of the English Department at RTI.

EK George was a living Bible Encyclopedia and I have never seen anyone in the Brethren world who had such a wide knowledge of the Bible and doctrines. At the same time he was a widely read man, and had also training over 500 Bible students by that time. This was a great encouragement to me, but his untimely death before the first graduation of RTI was a great personal and institutional loss.

Another person with whom I discussed the subject was Saneesh Cherian.

Picture: Saneesh Cherian in 2002 at RTI

An unmarried young man with a BTh and MDiv from BBI, he had already left a mark on the Brethren world through the 800-page Systematic Theology in Malayalam language. This book was the first comprehensive Systematic Theology produced by the assemblies worldwide, and Saneesh was one of the four authors. He was less than 20 years old when he co-wrote this book with me and two others and that was an unusual academic attainment at such a tender age. He was skilled at writing, teaching, and managing projects. He agreed to join me at RTI and that was a turning-point in administrating of RTI when it was eventually launched.

Several people much older to him wanted to join me as the second in authority at RTI and they put considerable pressure upon me not to take a person as young as Saneesh. Having worked under several Principals and Professors in secular and Christian institutions, I already knew well that thought the top man gets name, fame, and honour, the institutions runs with efficiency mostly because of the second person in authority. Even the best Principal in the world would fail if the person just below him is dishonest, incompetent, or devoid of vision. Even the clumsy Principal in the world would be able to run an institution with great success if the person next in command is a visionary, honest, and a competent person. Thus I knew that my choice of the second in command is more important than what it seems.

I stuck to my decision that Saneesh shall be the second in command and having given me a free hand in choosing my men and methods, the Steering Committee endorsed my decision. 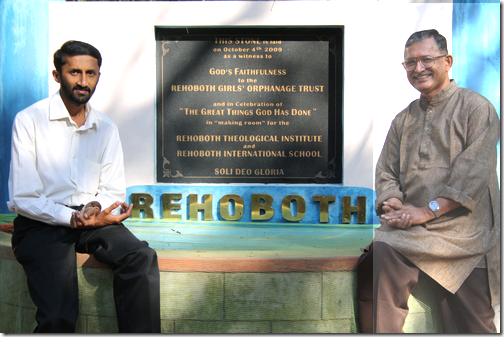 Pic: Relaxing near the well that symbolizes Rehoboth — in 2011 – Saneesh Cherian and Johnson C. Philip

I then contacted some of the best Bible teachers in the assemblies to become the faculty members of RTI, and all of them accepted my invitation without any hesitation. Many brethren from outside India consented to become Visiting Faculty members.

The Steering Committee wanted to offer a BTh program, but I told them that since BBI already offers a quality BBI program, RTI should try to be different. Since RTI would eventually have a spacious Campus, I suggested that we begin with a 4-year MDiv program and all of them accepted that it was a good proposal. The Committee had already decided that this is going to be a co-educational institution with both boys as well as girls admitted into the MDiv program.

Since RTI was a new institution, nobody knew of it, and therefore advertisements were placed much in advance in almost all assembly magazines and applications started flowing in. This amazed many because an applicant had to commit himself/herself for 4 years, but my assertion was confirmed that people are willing to commit long years of their life if quality is guaranteed in a given institution. [To Continue…]

1 thought on “RTI: The Unforgettable Memories Of A Great Institution — 005”

This site uses Akismet to reduce spam. Learn how your comment data is processed.

FREE Comics For You

FREE eBooks For You

Free Comics For You

Free eBooks For You

WHY Are You A Brethren?? Download Following Free Ebooks!